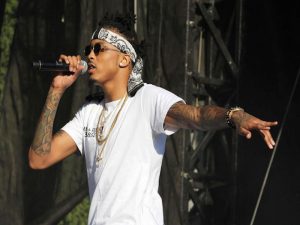 It has been a busy week for the Smith family, and anyone entangled with the power couple. Following the infamous Oscars slap, August Alsina would release a single titled “Shake the World,” where the singer drops a line about his entanglement with Jada Pinkett-Smith in the song. The single sparked a few fans to become upset with Alsina’s timing to release the single, accusing him of wanting clout at the expense of another black man.

“Boy that new song [trash] This is a bad look. You’re not a victim in this. You made a DECISION to sleep with another man’s WIFE and now that it’s time to reap you wanna put these people’s business out there instead of admitting that wasn’t P and owning your [sh*t]” one fan tweeted to the singer.

“Ifeel for you and your ancestors brother. Cus u ain’t nevaaaaa had to lie this hard,” Alsina wrote with a laughing emoji. “U know that shit hard boy! Shit put u in a hypnosis soon as it drop! Cus Got Dammit ‘I shake the wurrrrrrrrl.’”

“My point is this. You’re actually talented. All of that [sh*t] that you’ve been through in your childhood and life is what attracted a lot of us to your music. You don’t NEED to be doing THIS. All you need to do is drop a hot album and K.I.M. IJS,” the fan responded.

“I’m not a child anymore! & No need to remind me of me being talented, God gifted me that! I’m STiLL talking about MY life in my music, and Yal got a problem! BE MAD! Black twitter is the new age slave owners! But Yal ddon’town me! & u go stay mad about it,” August Alsina would respond.

What are your thoughts on the single? Check out a snippet below.

The post August Alsina Fires Back at Hate Following “Shake the World” Single appeared first on The Source.