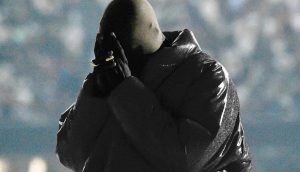 Kanye West has decided to not host the Grammys, leaving organizers with a void to fill. With his decision, YE is walking away from an $8 million payday.

TMZ provided another update on YE’s decision and revealed the $8 mil he was supposed to be paid for the performances on April 17 and April 24. In addition, YE had a $500,000 production fee.

With less than two weeks to go before he was set to stage, Kanye West pulled out of Coachella. In response, Coachella organizers reveal they had no clue YE would pull out, but state they are not upset.

According to TMZ, Coachella planners have not found a replacement for the DONDA creator but also have no anger toward West’s decision to drop out. Instead, the organizers have expressed that they want YE to get better.

In an insane plot twist, Coachella organizers found out YE was pulling out via TMZ like the general public. A formal reason for YE’s withdrawal was not given.

Kanye West was to join Billie Eilish and Harry STyles as headliners.

TMZ notes Travis Scott was scheduled to join Ye on stage during the performance, which is also believed to be called off.

Travis Scott was scheduled to participate in the 2022 festival but was pulled after the Astroworld Tragedy that claimed the lives of 10 people and injured over 300 others.

The post Kanye West Loses at $8 Million Bag by Not Performing at Coachella appeared first on The Source.