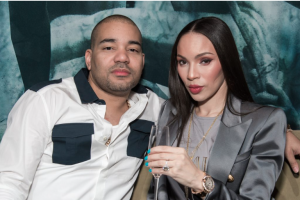 During an interview with The Shade Room, Power 105’s DJ Envy and his wife Gia Casey sat down to candidly discuss their “toxic” relationship, including Casey admitting that she’s faked orgasms for a decade during their intimacy.

Casey said, “We would be intimate and he would be putting his best foot forward like, he is in the business of satisfying just all around. He lives to make me happy, and he puts his best foot forward in that role.”  She then added, “So I would see him trying and really going to work, and I’m sure many women can relate, you want to reward that man for that work and the only reward that you have to offer is an orgasm. And even if I didn’t feel it, I would still be performative.”

The Breakfast Club host responded to Casey’s claims, saying,  “It hurt me because I thought I was pleasing my wife. You hear all these stories about women talking about their girlfriend ‘Oh girl he was so short, oh girl he ain’t doin’ nothin’, and I feel like they laughing, and now I feel like that’s what my wife is doing.”

See the full video below.

The post [WATCH] DJ Envy’s Wife Admits to Faking Orgasms During The Shade Room Interview appeared first on The Source.